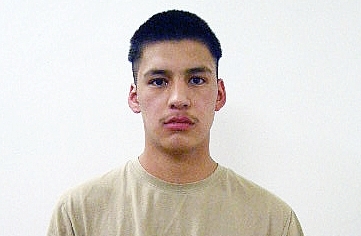 Leslie Whitebear, 17, hasn’t been seen since running away from the Echo Valley Youth Centre on Tuesday.

Police said they received a call from the staff at Echo Valley, who followed Whitebear on foot, but lost track of him after he ran into the bush.

An RCMP canine followed Whitebear’s trail from the youth centre, which led toward the Standing Buffalo First Nation.

However, the trail ended at Highway 210 and RCMP believe he may have been picked up by a vehicle.

An unmanned aerial vehicle and RCMP Search and Rescue are aiding in the search.

Police are concerned for Whitebear’s safety because of the cold temperatures.

Leslie Whitebear is 6-foot-2 with a slim build. He has brown hair and brown eyes and is of Aboriginal descent. He was last seen in black pants, a black hooded sweatshirt, a black ski jacket and a blue toque.

Whitebear has family relations to the Whitebear and Carry the Kettle First Nations and Regina.

If anyone has any information about the location of Whitebear, contact the Fort Qu’Appelle RCMP at 332-2222 or call Saskatchewan Crime Stoppers at 1-800-222-8477.

Also on Tuesday, a 17-year-old male, Leslie Whitebear, went missing from Fort Qu'Appelle. While Fort Qu'Appelle RCMP have not verified Whitebear has been found, based on a message Whitebear sent to some of his family members on Facebook, RCMP said they believe he is safe.