Police in Hart County want your help finding a missing 19-year-old.
Munfordville police said Brandon Crain disappeared a week ago from his apartment on Center Street.

Police said Brandon vanished in the middle of
the night and didn't take anything with him. They are also telling WAVE
3 he has not been to work in the last week.

They represent a handful of agencies looking for any information that leads them to Brandon Crain.
"We will always be looking for him until he's found," says Joey Cox from the Hart County Sheriff Department.

Even though this is the third time these volunteers
have searched Munfordville's Green River in the last week, they are still clinging onto hope.

"We've talked to friends, co workers anybody that knows him to get information as to where he might
go, places he liked to hang out and so far nothing has panned out," says Cox.

Despite the lack of leads, a team of searchers are
also gathering in downtown Munfordville in front of the apartment where Crain was last seen.

"They bullied him over his sexuality, they called him gay from third grade on," says sister, Vanessa Moldon.

Crain's older sister, Vanessa Moldon says her brother was diagnosed with depression after years of being bullied.

Molden believes the teen was too trusting and willing to accept anyone as a friend.

Crain's aunt, Wanda Collins says the most recent
example of the 19-year-old's giving character was in January, when he lent his car to someone for a month.

Collins says it was the same night that Crain asked for his car back, that he disappeared from his mother's apartment.

The Sheriff's department says they have no reason to believe Crain fell victim to foul play.

So for now, the case remains a painful mystery, one that these locals refuse to leave without an ending.


The cause of Brandon Crain’s death remains unknown, but his older sister
says she is committed to homeschooling her children after watching her
brother suffer for years at the hands of schoolyard bullies.

The Kentucky State Medical Examiner’s Office confirmed Wednesday to Hart
County Sheriff Boston Hensley that a body pulled Saturday from the
Green River in Butler County is Crain, 19, who was reported missing
from Munfordville on Jan. 26, Hensley said.

“We finally got our closure,” Crain’s older sister Vanessa Moldon said. “That’s what we’ve been praying for.”
Sometime in the early morning hours of Jan. 26, Crain walked out of his mother’s home without his cellphone or his wallet.

Crain suffered from depression most of his life, said Moldon, of Horse Cave.
Just before he disappeared, he had started taking an antidepressant medication.

His cause of death has not been released. However,
foul play is not suspected, according to a news release from the Kentucky State Police.

Crain quit school when he was 16 after
being bullied about what others perceived to be his sexual orientation,
Moldon said in January. Others called Crain homosexual, something he
adamantly denied, Moldon said. But he felt tortured by the taunts.

“It makes you want to think about homeschooling your kids, that’s for
sure,” Moldon said. “You have to take it upon yourself to protect your
own and protect them the best you can.”

Crain had talked about
suicide with others, but never with her, she said. Two weeks before his
disappearance, Crain suffered a gunshot wound to his thigh, Moldon
said. Crain told his sister that he wanted to know what it would feel
like to be shot and that he shot himself with a .22-caliber gun.
“He was just unhappy,” Moldon said. “He just wanted to be loved. He was loved. He just didn’t realize it.”

“Whenever he shot himself in the leg I addressed the issue” with him, Moldon
said. Crain assured her that he was not thinking about killing himself.

Even though his body has been found, Moldon still does not know if her brother’s death was accidental or a suicide.

Her advice to other families is to “be sure to tell them you love them” and take any threats of suicide seriously.

“I love Brandon,” Moldon said. “The words ‘I love you’ didn’t come out
that often, but I did love him. Maybe, if I told him more, he wouldn’t
have felt so alone, I guess.”

Before his disappearance, Crain
worked as a greeter at Applebee’s in Glasgow, a job he dearly loved. He
so desperately wanted friends that he would give away his entire
paycheck to co-workers in need and go without food just to help someone
else, Moldon said.

“It’s just sad. I never would have thought him to kill himself,” Moldon said. “He was trying to get closer to God.”

“I do want to thank the public for being so supportive at this time and
all the prayers that have gone out,” Moldon said. “We sure couldn’t
have made it as well as we did without knowing they were there
supporting us. Brandon has touched a lot of hearts. The whole story has
touched a lot of people. If nothing else, maybe they will hear the word
of God at his funeral.”

Brooks Funeral Home in Munfordville
is overseeing the funeral arrangements for Brandon Crain. He did not
have life insurance, and his family needs assistance paying for the
funeral expenses, Crain’s older sister Vanessa Moldon said. 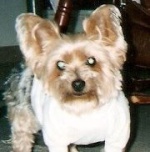 GLASGOW — The Kentucky State Medical Examiner has confirmed that the
body found in the Green River in Butler County on Saturday is that of
Brandon Tyler Crain, according to a press release from Hart County
Sheriff Boston Hensley.

Crain was last seen and reported missing to the Hart County Sheriff's Department on Jan. 26.

For the complete story, see Thursday's print and e-editions of the Glasgow Daily Times.