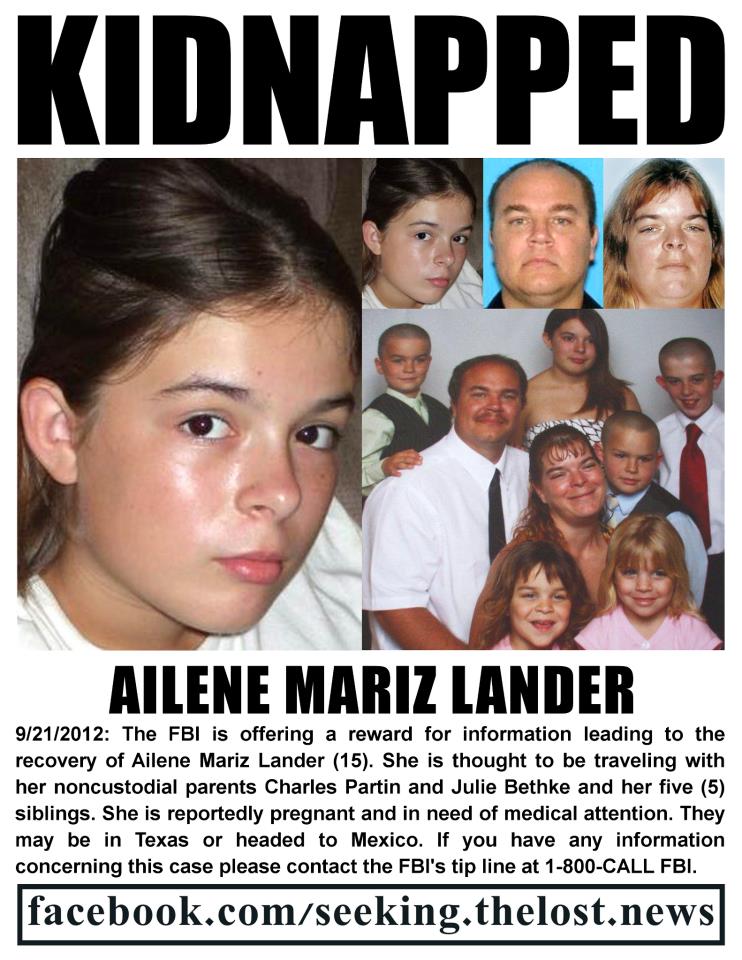 9/21/2012:
SPOTTED IN TEXAS: GIRL KIDNAPPED BY STEPFATHER! He was caught ▬►HAVING
SEX with the girl who was then removed from the home. Now he has
KIDNAPPED HER! Article: The man accused of kidnapping his pregnant
stepdaughter in Dothan this week was caught in Tennessee having▬►E sex
with the girl just two days before she was taken into custody by social
workers.

A report claims a Hamilton County, Tennessee deputy
caught Charles Partin receiving sexual gratification from the girl
September 4th. Aileen Lander, 5 months pregnant, was taken into DHR
custody September 6, according to posts made to Facebook by her family.

Partin was not arrested and it's not immediately clear why he wasn't
taken into custody. A source familiar with the case said it could be
because both he and the girl denied the act.

An investigation
was launched into the incident but it's not clear whether Partin will
face criminal charges in relation to the alleged sex act. Hamilton
County Sheriff's Office Public Information Officer Janice Atkinson said
she could make no comment about the case at this time.

It's
not known if other family members were present when the alleged act took
place at a campground type facility near Chattanooga. It's also not
immediately clear why Partin and the girl were traveling through the
area. Partin has family in Falmouth, Kentucky and the route between
there and southeast Alabama passes through Chattanooga. The family lives
in Barbour County.

Partin is accused with conspiring with his
wife, Julie Bethke, to abduct her daughter from an office of Dothan
OBGYN located in the Southeast Alabama Medical Center Doctor's Building.
The couple is believed to be in the company of Aileen and five of her
siblings. A van used in the abduction was located Thursday night at an
undisclosed location.

9/21/2012: TEXAS: A 15-year-old girl abducted from a medical facility
in Alabama has been spotted in ▬►East Texas. Alabama's Dothan Police
Department issued a release on Friday morning stating the girl and her
accused abductors were spotted in East Texas.

The preacher copied his driver's license, as it's standard protocol when giving away money.

Sheriff
Smith says Partin got back into a green minivan and drove off with a
woman and six children. Officials say he stopped at a Brookshire
Brothers on State Highway 21 to get gas before heading west.


San Augustine County Chief Deputy Gary Cunningham says the preacher said
everyone seemed okay in the van, and no one seemed distressed.

The girl, Ailene Lander, was last seen at the Southeast Alabama Medical
Center on Monday afternoon, where she was attending a medical doctor's
appointment. Ailene was in state custody, officials say, and the parents
had no right to take her.

Officials say Ailene was
transported to the appointment by an employee of the Department of Human
Resources. That employee told police while at the hospital, she and
Ailene were approached by Ailene's stepfather, Charles Partin. The DHR
employee says Partin took Ailene to a van and exited the parking lot.

The FBI says intelligence indicates that Partin and Ailene may be
accompanied by Ailene's mother, Julie Bethke and her five siblings.

Both Partin and Bethke have active warrants our for their arrest for the their participation in the abduction, officials say.

Authorities say they believe the suspects may reach out to charitable organizations seeking assistance.

No suspect vehicle description is available, as Dothan Police say the
two-tone light blue over dark blue 1994 Mercury Village van was located
with the girl and suspects no where nearby.

Border Patrol agents are on the lookout for all parties, as it's likely they'll make an attempt to cross the U.S. border.

According
to information released by the Dothan Police Department, Ailene is in
immediate medical danger, but would not specify further on her medical
condition.

Authorities say a reward is now being offered for Ailene's safe return.

Preliminary information suggests that they
were caught in Cincinnati, but this is unconfirmed. There is an active
Amber Alert in effect for Aileen Lander, and she is now safe as are the
other children in the family.

Authorities have been searching for the
15-year-old since she was taken from DHR custody by a man identified as
her step-father on Monday.


Lander was abducted from Southeast Alabama
Medical Center during a scheduled medical appointment. The FBI became
involved in the case on Tuesday.

WSFA 12 News will update this story as
details become available. Watch WSFA 12 News tonight at 6:00 p.m. for
the complete story.

This is so disgusting. I hope the nasty stepfather is put away for a long time. He's probably molested many children. And the mother...she needs to serve time for allowing this. What is wrong with people?

The good news is this all the kidnappers are arrested and behind the bars now.