Detroit — Police found the body of a 4-month-old baby boy at an east-side home Wednesday, and a man was taken into custody after fighting with officers at the scene.

Two officers were treated for minor injuries after the altercation, which occurred when they were called to the 13200 block of East State Fair about 2:45 p.m. to investigate a report of an unresponsive child, Detroit Police Sgt. Eren Stephens said.

Stephens did not immediately know whether the man was related to the baby, though relatives at the scene identified him as the child's father. The Wayne County Medical Examiner's office was called to investigate the baby's death.

Stephens did not know the nature of the officers' injuries. They were taken to a hospital for non-life-threatening injuries and were in good condition as of 4:30 p.m.

At least a dozen relatives of the deceased baby boy, identified by family members as Christenn Pierre Harris Steen Jr., huddled on a slush-covered sidewalk around his mother, also named Christenn. The woman cried hysterically outside a home on the 13200 block of E. State Fair Street as police removed yellow tape from around the perimeter.

"His mom called me and told me; she was crying very hard," said cousin Tiffany Oltis, 32.

Relatives at the scene identified the father as Pierre Steen.

Oltis said Steen was arrested after becoming upset that rescuers would not let either parent accompany the baby in an ambulance. Family members believe the child's body was taken to St. John Hospital.

Relatives said the baby, the youngest of five children, was born Sept. 13, 2012.

Maternal grandmother Jacqueline Hills, 44, said her grandson was highly energetic in his short life and "looked just like his dad."

"He had strong little lungs," she said. 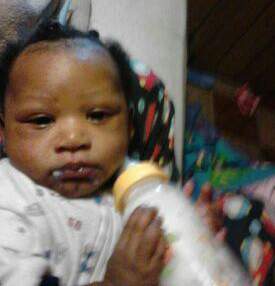 
No more information is to be found - even the original story has been deleted from the Detroit News site.

(Christenn Pierre Harris Steen Jr. is how the Grandmother gave his name.)

Three Detroit police officers were injured Wednesday afternoon while responding to a home on E. State Fair Street where a 4-month-old baby was found dead.

According to police, the officers got in a fight with the child's father when they arrived at the home.

Police say the father became very angry and threw a solar garden light at one of the officers, starting the fight.

One officer was head-butted and had to be taken to a hospital. One officer had his knee blown out and the third officer, a female, suffered serious bruising and scratches. All three were being checked out and treated at a hospital.

The father has been taken into custody.

The baby may have been dead at the home for some time, police said.

Police were originally called to the home on a report of a baby not breathing. Local 4 is told the baby's name is Christian Harris Steen.

The cause of death is not yet known.

A Detroit Homicide unit has been at the home investigating.