A McLean County judge has ordered a
Bloomington man held on $1 million bond in the fatal beating of his
14-month-old daughter.


Prosecutors charged 47-year-old Jeff Meece with three counts of
first-degree murder Friday in the death of his daughter, Erika.


Police say they found the severely injured girl in the family
home Thursday after arresting Meece, who had been spotted smashing
the windows of the house with a baseball bat. Officers said they
used a Taser and pepper spray on Meece after he refused to put down
the bat.


Erika was pronounced dead late Friday morning at OSF St. Francis
Hospital in Peoria, where she was transferred Thursday.

A 14-month-old Bloomington girl is allegedly beaten to death by her father-- with a baseball bat.

Thomas Meece, 47, is being held on three counts of murder.

Meece was taken into custody yesterday after a report of a man breaking out windows at his home. Police found the injured Erika Meece on the floor of an upstairs bedroom. She was taken to OSF St. Francis Medical Center in Peoria.
Peoria County Coroner Johnna Ingersoll says the toddler died this morning as a result of head injuries.

Police say when they arrived at the scene, Meece was very agitated and difficult to approach.
"When approached by the first officer he had the baseball bat in his hand and he refused to drop it and was in fact waving it at the officer," said Bloomington Police Officer, Duane Moss.
"At that time officers tased him. He was still some what resistant and they had to use pepper spray as well."

In Court in Bloomington Friday afternoon, prosecutors indicated Meece had confessed to killing the child. 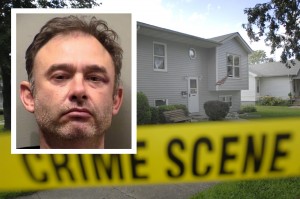 A 14-month-old girl's death -- allegedly at the hands of her father -- was due to head injuries consistent with blunt-force trauma, the Peoria County coroner said Saturday.
Coroner Johnna Ingersoll's office conducted the autopsy on Erika Meece of Bloomington on Saturday.
Police found Erika inside her father Jeff Meece's home after responding to reports a man breaking glass with a baseball bat. She was transferred to OSF Saint Francis Medical Center, Peoria, around 11:20 a.m. Thursday and was unresponsive and pronounced brain dead. She was formally pronounced dead at 11:20 a.m. Friday.
Ingersoll could not say whether Erika suffered some of her injuries from being struck with a bat, as Jeff Meece allegedly told authorities while being questioned. The Meece family told The Pantagraph that police told them she was struck with a bat.
Jeff Meece was charged Friday with three counts of first-degree murder and was being held on $1 million bond at the McLean County jail.
Family say Erika, who lives with her mother, Renee Frisch, elsewhere in Bloomington, only visited her father Thursdays and Fridays. Ingersoll said she was told Erika arrived at her father's Madison Street home around 7 a.m. Thursday.
The 911 call about the man breaking glass came in around 9:20 a.m., police said previously.

Jeff Meece, 47, Bloomington, pleaded not guilty to murdering his 14-month-old daughter. He was arrested Aug. 20 outside 609 S. Madison St., where he told police "someone killed my baby" and "I killed my baby," according to a prosecutor's statement.
Inside the home Meese reportedly shared with his mother and uncle, police found Erika Meese with traumatic injuries. The girl died the following day at a Peoria hospital. She suffered skull fractures and hemorrhaging, said court records.
Police responded to the home in response to a call involving someone breaking windows with a baseball bat and found Meese holding a bat, according to police reports.
A Sept. 25 hearing date is set for Meece, who remains jailed in lieu of $100,000.


A McLean County judge has ruled that a
Bloomington man accused of fatally bludgeoning his 14-month-old
daughter with a baseball bat is mentally unfit to stand trial.


Police responding to calls about a man wielding a bat last Aug.
20 found young Erika Meece suffering from severe head injuries. She
died in a Peoria hospital the next day.


The child's father, 47-year-old Jeff Meece was arrested and
charged with first-degree murder.


Freitag ordered Meece sent to the McFarland Mental health Center
in Springfield. The judge said that with inpatient treatment, Meece
may be restored to fitness within a year.

A McLean County judge has found a Bloomington man not guilty by reason of insanity in the killing of his 14-month-old daughter last year.

Circuit Court Judge Robert Freitag made the ruling Wednesday in a stipulated bench trial where both sides acknowledged the evidence that would be presented at a trial. Freitag ruled there was enough evidence to support a finding that 48-year-old Thomas Jefferson Meece committed first-degree murder by causing the head injuries that killed Erika Meece.

Police were called to Meece's home in August 2009 because of reports of a man swinging a baseball bat. They say they found the child inside the home with serious head injuries. She died in a Peoria hospital the following day.