A body is found in Rochester and police think they might know who is.
A father and son looking for deer antlers came across the remains. ABC 6
News talked with the teen who made the discovery.
"It's the weirdest thing I've ever encountered, probably will be,"
says Josh Donovan.
It was a nice Wednesday night, when Josh and his dad decided to head
out into the woods behind their home.
"I saw a little white thing like a round thing sticking out of the
ground so I went over to it thinking it was a deer skull or something
like that. I picked it up, looked at it and noticed it was a human skull
so I yelled to my dad. I looked around a little more and I saw the
chest and torso and the rest of the bones," says Josh.
That's when Josh called police. Investigators spent Wednesday night
and all day Thursday on the scene, collecting evidence and trying to
identify the body.
"In cases like this it's imperative
that we collect data on the front end, clothing what people are
carrying," says Captain Brian Winters with the Rochester Police
Department.
Police are trying to match the body with a list of missing persons
from the area and they think they found a connection.
"There does appear to be a potential link between a missing person
and the remains discovered," says Winters.
While police say it may take some time before they can positively
I.D. the body, Josh hopes in some way his discovery will give someone
some answers.
"I hope I did. I hope it was like a missing person, not just anything
else because I hope people can have closure with their missing person
or the cops can finally stop an investigation," says Donovan.
Police say that it appeared the body was there for a long time and
was likely covered up by snow throughout the winter. 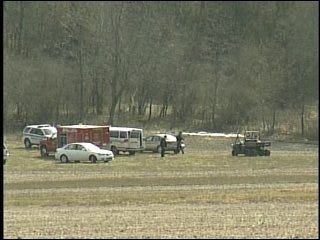 ROCHESTER, Minn. (KTTC-DT) -- Investigators say
it appears a body found in some woods off north Broadway is a missing
Rochester man.
Capt. Brian Winters from the Rochester Police Department says an ID
found near the body is from a man in his 50s who walked away from a
group home in January, 2008. However, the man's name is not being
released until a positive identification is made.
He was reported missing by family and by the group home. According to
Capt. Winters, the man had a medical condition and needed regular care.
"At the time of his disappearance, he was distraught and didn't have
that medical care."
The remains were discovered near the 4200 block of Highway 63 North
by Josh Donovan and his dad around 7 p.m. Wednesday
The pair were out looking for deer antlers and found the skeleton
propped up against a tree.
The Olmsted County Coroner's Office has recovered all bones and they
are being examined by an anthropologist.
Authorities say results could take up to a couple months.
http://www.kttc.com/Global/story.asp?S=12162891

is this the same body?

No further info available that I could find.