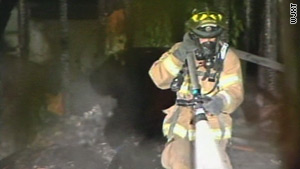 Two girls and three boys were killed during a fire in a Marion, County, Florida, home.


(CNN) -- Investigators were working early Tuesday to figure out what caused a fire in a home in Marion County, Florida, that killed five children.

Firefighters got a call about the blaze at about 10:40 p.m. and arrived eight minutes after the emergency call, said Peveeta Persaud, a spokesperson for Marion County Fire Rescue.

"When they arrived the structure was fully engulfed," said Persaud. "It was a wooden structure."

At least three other people in the home were able to escape and were taken to nearby hospitals, the spokeswoman said. The fire marshal and other officials were working to determine what caused the blaze, Persaud said.

A neighbor told CNN affiliate WKMG that she was able to break a window and help get one woman out of the home but the smoke and fire was so treacherous that she could not help any of the others.

"The whole house was engulfed in flames. And I heard the mom yell, 'My babies, my babies are inside,'" said the sobbing neighbor, who was not identified. "It is very, very sad because I wanted to get all the babies out. My kids play with their kids."

Marion County is located about 90 miles northwest of Orlando, Florida.

Angela Stroud talks about how she and her husband, Robbin, saved one person by pulling her from the fire. Angela's hand was cut on broken glass during the rescue.

CITRA - Five children were killed in a house fire in Citra Monday night.

The young woman and two girls were taken to area hospitals, said Marion County Fire Rescue spokeswoman Peveeta Persaud. Firefighters later found the bodies of the boys in the charred remains of the 1,400-square-foot wooden house.

The aunt was flown to Shands at the University of Florida in Gainesville with first- and second-degree burns on her face, upper back and arms, Persaud said.

The children's mother, Krista Jordan, 31, and grandmother, Linda Cole, 54, escaped the blaze with burns and smoke inhalation. They were in stable condition at Munroe Regional Medical Center in Ocala.

The house fire was reported to Fire Rescue at 10:34 p.m. A representative of the State Fire Marshal's Office was on scene early Tuesday morning but, as of 4 a.m., had not determined the cause of the blaze.

Marion County sheriff's Detective Donald Buie said the mother and grandmother told him a space heater in the living room may have been to blame.