LAFAYETTE, Colo. -- Police in Lafayette were investigating the deaths Thursday of a woman and a child. Their bodies were found inside the garage of a home in the 1500 block of Harvest Dr. late Wednesday night.

Investigators say they were found in the backseat of a car, the apparent victims of carbon monoxide poisoning. Police were looking into whether it was an accident or an intentional act.

The woman's employer called police after becoming concerned when no one heard from her and she couldn't be reached by phone. Officers went to perform a welfare check and didn't find anyone home.

Then they looked through the garage windows. They were covered with condensation, and police could see the car doors open.

Officers were able to enter through a side door. They found the woman and little girl, and pulled them outside, but the two were already dead.

Neighbors didn't know much about the woman or girl. "She rented her home, and she moved in probably about a year ago and we're all just out here shocked and saddened," said Joan.

"We realize she was a renter, and maybe that's part of the reason we didn't know her better," she said.

Another neighbor said police came to the home during the summer. It was not clear why that happened. "It seems like there might have been a history of problems there, which is really sad for all of us that we didn't know what was going on," the neighbor said.
http://www.kdvr.com/news/kdvr-woman-daughter-found-dead-111810,0,2458284.story

A 45-year-old Lafayette mother and her 9-year-old daughter have been found dead in their home. Co-workers of the woman believe the deaths, which happened in a car in the family garage, were an accident.


Police found the bodies on Wednesday night. They say there was no sign of trauma to the bodies and no signs of struggle. It appears they died from carbon monoxide poisoning.

The mother worked for a company that delivered door-to-door fliers. She and her daughter attended a birthday party for her boss at the Alley Cat bar and restaurant in Louisville Tuesday night. Co-workers said they dropped the two off at their home. They were likely the last to see the them alive.

When the mother didn't show up for work on Wednesday co-workers got worried and called police.

CBS4 now knows the names of the people who died but the station is not releasing it because family members have not been notified. The estranged husband is on a business trip overseas and is now headed back to Colorado.

"The officers discovered the bodies in a vehicle parked in the garage. The fumes were overwhelming inside the garage once they were able to make entry. The officers noticed on the bodies a bright cherry red color, attributed to carbon monoxide poisoning," said Cmdr. Gene McCaughey with Lafayette police.

Police said the two people were the sole residents of the home.

Police had been called to the home before on welfare checks. Officers said in the past, they found the woman intoxicated while her daughter was staying somewhere else.

A check of police records shows the mother was arrested for child abuse, twice.

Once at a YMCA when the woman's daughter was 2 years old. Police said the woman was drunk, and her daughter was turned over to a friend by social services.
http://cbs4denver.com/local/lafayette.murder.suicide.2.2014985.html

The woman who was found dead alongside her 9-year-old daughter in the garage of their Lafayette home this week had a history of alcohol abuse and expressed a desire to kill herself, according to court documents obtained by the Camera on Friday. Patrice Clark was arrested twice on charges of misdemeanor child abuse -- in 2001 and 2002 -- after police found her intoxicated while caring for her then-infant daughter. During the first incident, police reported that she told officers, "I want to end my life. It is too hard." Clark was placed on suicide watch at the jail, according to a Boulder County Sheriff's Office arrest report. On Saturday, the 45-year-old University of Colorado graduate was set to begin a 20-day work-release sentence for a September DUI arrest in Erie. Her blood-alcohol level at the time of her arrest was 0.266 -- more than five times the .05 limit for driving while impaired. Clark and her daughter, Nicole, were found dead Wednesday night in the back seat of a car inside the garage of their home at 1524 Harvest Drive in Lafayette. Nicole Clark was a student at Heatherwood Elementary School. Police, who said there was an "overwhelming" smell of exhaust fumes in the garage, suspect that the two died of carbon-monoxide poisoning. Boulder County Coroner Tom Faure hasn't released the cause or manner of death. Police said Thursday their "first assumption" is suicide, but they would not elaborate on whether they believe Clark committed murder-suicide or that the deaths were an accident. "We're still early in the investigation," said Faure, who met with detectives at the Lafayette Police Department on Friday morning. "There's further investigation to do, there are further lab tests to do." Boulder Valley School District spokesman Briggs Gamblin said Friday that Nicole Clark had attended Heatherwood Elementary School through open enrollment since kindergarten. He said parents of students at Heatherwood were alerted Thursday to the fact that a student had died and crisis team counselors were brought in Friday to discuss Clark's death with students. In an Aug. 9, 2001, arrest report, a Boulder County Sheriff's deputy wrote that he arrived at Clark's Canon Park home to find her feeding a 6-week-old baby, identified as Nicole Clark. The deputy wrote that Patrice Clark "appeared extremely intoxicated" and that her "speech was slurred and her movements were slow and deliberate." She admitted to the officer that she had broken a number of items in the house, according to the report. The deputy also reported that a neighbor told him he had heard yelling coming from the house and had looked inside to see a kitchen table tipped over on its side. Clark told the deputy that she hated her husband and "everything is easy except for my husband." She said her baby is "easy," according to the report. A social services worker told police that Clark told her to take her daughter away and that "she didn't care." "She stated, 'I dare you to take her,'" according to the report. Clark also told authorities that she wanted to kill herself because she was distraught over her mother's recent death and felt like she couldn't measure up to her parents. She was arrested on suspicion of misdemeanor child abuse and placed on suicide watch. Less than a year later, Clark was arrested again on the same charge 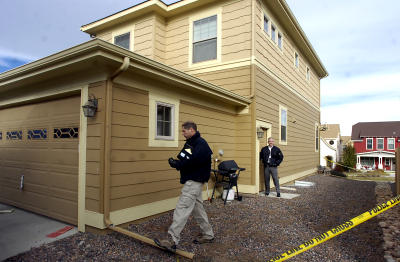 Lafayette police Sgt. Emerson, left, and detective David Self investigate the scene at 1524 Harvest Drive, where the body of Patrice Clark and her daughter, Nicole, were found Wednesday night. (PAUL AIKEN)


after Lafayette police found her staggering around her Jeep while Nicole screamed in a car seat outside the YMCA at 95th Street and Arapahoe Road. A friend of Clark's who was with her told police they'd each had a beer and visited the Lafayette Wine Festival earlier that day, according to a June 22, 2002, arrest report. Clark became "distraught" as police questioned her and kept insisting they take her to jail, the report says. "Patrice also repeatedly turned around with her hands behind her back and continued asking to be placed under arrest," an officer wrote. Finally, police said Clark became "uncooperative" and was handcuffed and booked into jail. A letter from the Parker Valley Hope Residential Treatment Center in Parker, which was included in Clark's court file, said Clark had been treated for alcohol dependence from June 27, 2002, until July 23, 2002. Clark was sentenced to 30 days in jail and 18 months of probation. She was also ordered to complete parenting classes and substance abuse treatment. In one court document, Clark identified her daughter's father as Keith Clark of Erie. Clark's neighbors in Lafayette have told the Camera that the couple is separated. No legal record of a divorce could be found. According to a travel itinerary Patrice Clark provided the court, her husband began a trip to Taiwan on Nov. 12 and was supposed to be returning to Colorado on Friday. According to neighbors, Keith Clark returned Thursday after learning of the deaths. No one answered the door Friday at his Erie home. A large portrait of Nicole hung on the front door. Dressed in her soccer uniform, she smiles at the camera as she prepares to kick a ball.


Investigators looking into the deaths of a mother and daughter from Lafayette may be leaning toward the idea that both died accidentally in their garage last week. Lafayette police Cmdr. Gene McCausey said Tuesday that evidence examined so far points away from a deliberate cause of death, including the possibility that Patrice Clark intentionally killed herself or her 9-year-old daughter, Nicole. McCausey said no suicide note has been found, and friends of the family told police that Clark, 45, hadn't recently expressed any desire to die. "The lack of evidence that it was a deliberate act could give credibility to the theory that it was accidental," he said. But the commander warned that the investigation is ongoing and that nothing can be ruled out until full results — including a toxicology report — are provided by the Boulder County coroner's office.