A young disabled black boy, Adji Desir, has been missing for more than
two years and his case remains unsolved. Please help us get the word
out by distributing this story widely.
Adji Desir has been missing
from outside his grandmother’s residence in Immokalee, Florida, since
Saturday, January 10, 2009. Adji reportedly went outside to play with
neighborhood kids after dinner. He was reported missing a little while
later and his whereabouts remain unknown. Adji is of Haitian descent and
was last seen wearing a blue and yellow t-shirt, blue and yellow
shorts, and black and gray sneakers. He is mentally handicapped and
functions at a two-year-old level. He is non-verbal, has a very limited
vocabulary, and only understands Creole.
Because of the length of
time Adji has been missing, an aged-progressed picture (e.g. in green
shirt) and an original photo of him back are provided.
This little
boy lived with his mother and stepfather at the time he disappeared.
Authorities searched the immediate area and found no clues and while his
biological father resides in Haiti, no evidence suggests he has left
the United States. None of Desir’s family members are considered
suspects. But the case has grown cold and no new leads have surfaced, so
that’s why spreading Adji’s image around the web may help yield more
clues.
The FBI is offering a $10,000 reward for information leading
to his recovery. Anyone with any information is urged to call the
Collier County Sheriff’s Office at 239-774-4434

IMMOKALEE, Fla.- It's been three years to the day that a six-year old Immokalee boy vanished. Still no one knows how Adji Desir disappeared, but his family and law enforcement still hold out hope.

Jesula Lebaud is still sickened by the memory of her grandson vanishing from her own front yard.

Little Adji Desir disappeared from Immokalee's Farm Worker's Village on January 10th, 2009. Despite three years of searching, investigators say they're no closer to finding Adji, then the very first day he went missing.

"We don't have any idea what happened to Adji. We looked into every lead that came in. We checked the dumps, that would have been a recovery. We are continuing our investigation as if Adji's out there safe somewhere, and we just need to find him and bring him home," Collier County Sheriff's Office's Sgt. Ken Becker said Tuesday.

The National Center for Missing and Exploited Children is now releasing a new picture of what they think Adji would look like, three years later.

Investigators hope the new description will rekindle interest in the case. Over the course of the investigation, they've looked into over 2,400 leads. Still, they say the case isn't closed.

"We're three years into it now, but we're continuing with that mission with hopes that at some point, we'll get the lead that'll bring Adji home," Becker said.

It's a hope Adji's grandmother clings to each day.

Anyone with information is asked to call the Collier County Sheriff's Office at 239-252-9300 or leave an anonymous tip with Southwest Florida Crime Stoppers at 1-800-780-TIPS.

I was just going thru my Photobucket account and found a picture of Adji from when he first went missing. We haven't forgotten, Adji. 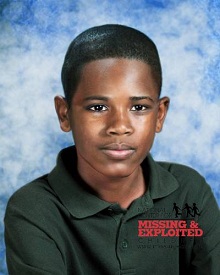