Dorothy Clay Sims, one of Casey Anthony’s defense attorneys, was a guest on Greta Van Susteren’s “On the Record” last night.

Sims talked about post-jail life for Anthony, who was acquitted of first-degree murder in the death of her daughter, Caylee.

The Sims appearance was notable for another reason: The attorney had a more glamorous look. 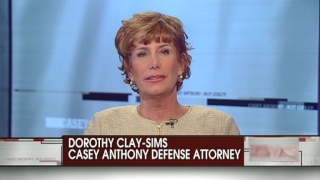 In discussing Anthony’s security after jail, Sims said, “I would just hope that she would be treated with compassion and respect and her privacy taken care of. We are very concerned about her for a number of reasons. But I have faith that people will come around, people will show compassion. I think that things are calming down already.”

Dorothy Clay Sims with Casey Anthony on July 3 at the trial. Photo credit: Red Huber/Orlando Sentinel
Van Susteren said she was troubled by the word compassion in relation to Casey Anthony.

“You say compassion, and regrettably, the first thing I think of is that, at best, her child was missing. At worst, of course, that the child was murdered by her,” the Fox News Channel host said. “She had a cavalier attitude — partying and getting a tattoo. … It’s hard for me on the outside to think of compassion for her.”

Sims replied, “You can never have too much compassion.”

She sidestepped a Van Susteren question about whether Anthony knows about the level of “hatred and vitriol” in the public over the verdict.

“Any conversations between Casey and her attorneys are clearly confidential,” Sims said. “But she’s being taken care of. She will be taken care of.”