(Newser) – Sheila Lyon, 12, and her sister Katherine, 10, went to see an Easter exhibit at a Maryland shopping mall on March 25, 1975, and were never seen again. Some 39 years later, police yesterday named a person of interest in the case, Reuters reports. Lloyd Lee Welch, now 57 and imprisoned in Delaware since 1997 on child sex-related convictions, was at the time a carnival ride operator and drifter. Police believe he was at the Wheaton Plaza mall, near Bethesda, the day the sisters disappeared, and say he was "observed paying attention" to the girls and may have been following them. They were last seen walking home.

Police have given no details on how they connected Welch to this case, though the Washington Post reports that when going through old case files last year, a Montgomery County police official says "he jumped out at us." Police say they don't have enough evidence for an arrest and are asking anyone who has had contact with Welch or his late girlfriend, Helen Craver, to come forward. Welch's stepmother tells NBC Washington she remembers Welch watching the news about the disappearance on TV: "They were talking about a reward for information," she says. "Lloyd thought he was going to get something in it, I reckon, and he called in and said he knew something, but I don't think he knew a darn thing."

Convicted rapist is suspect in 1975 disappearance of young Maryland sisters
Sheila and Katherine Lyon, ages 12 and 10, disappeared after going to a shopping center near their home in Maryland in 1975. Lloyd Lee Welch, 57, is the prime suspect in the girl's disappearance. The former carnival ride operator is locked up in Delaware for raping a young girl.

A then-18-year-old carny — and registered sex offender — is the prime suspect in the disappearance nearly 40 years ago of two suburban Maryland girls.

Lloyd Lee Welch, 57, went on to a life of violent crime as a sexual predator across the country after the March 25, 1975, day when Sheila, 12, and Katherine Lyon, 10, went missing as they walked to Wheaton Plaza in Montgomery County.

The girls, daughters of local radio star John Lyon, vanished as they walked to get pizza at the shopping center with just $4 in their pockets.

Their dad used his high profile to plead for public help in tracking the pair down, but they were never found.

The case has transfixed the region and forced a culture change in the area as frightened parents reined in their childrens’ freedom. 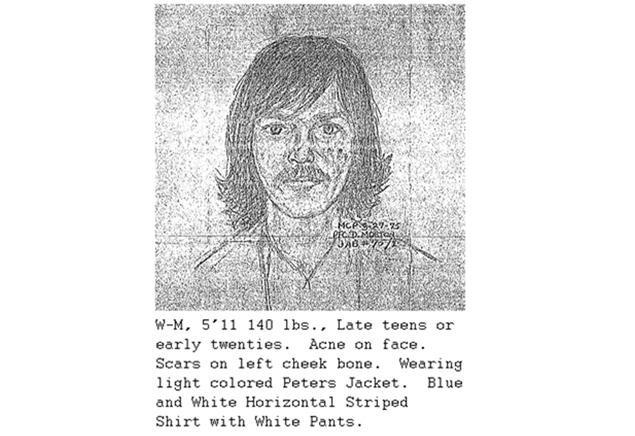 Sketch provided by witness who was at Wheaton Plaza on the day of the Lyon sisters disapperance. The witness stated that the person depicted in the sketch was fixated on the girls.

The pedophile is still locked up in Delaware for one of the rapes.

He used his position as a ride operator with a cross-country carnival outfit to prey on the youngsters, cops say. 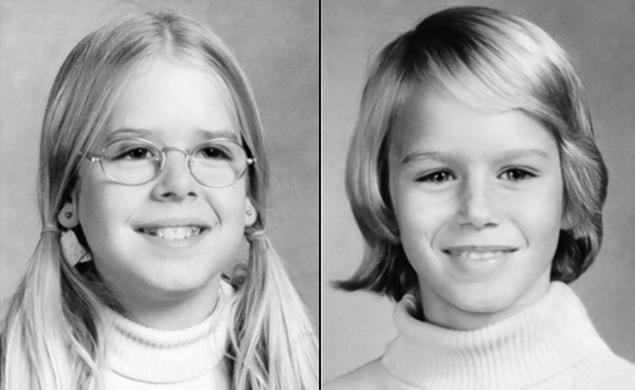 Montgomery County Police Department
Sheila (left) and Katherine Lyon disappeared in 1975 after going to a shopping center to buy pizza. A break in the case found police announcing they had identified a person of interest.
On the day the blond girls went missing, Welch was at the shopping center and “was noticed paying attention to the sisters,” cops said.

A witness description, and ensuing sketch, of the creepy man with shoulder-length hair and a mustache looks much like a mugshot for Welch that was taken two years later after he burglarized a house just blocks from the shopping center.

In the intervening years, the man traveled from Maryland to Florida, to South Carolina and Iowa and cross-country to Los Angeles. Along the way, the drifter racked up criminal convictions, including the rapes.

Despite the circumstantial evidence linking the convict to the shopping center, cops still lack certain proof to convict the pervert, a Montgomery County police spokesman said. 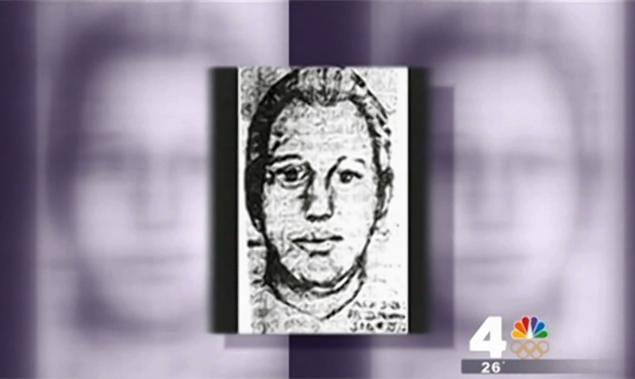 NBC Washington
A sketch based on a witness description looks much like a mugshot for Lloyd Welch that was taken two years later after he burglarized a house just blocks from the shopping center to which the missing Lyon sisters had been headed.

“If we had enough to lock him up, we’d lock him up,” Officer Bob Ladany told the Daily News on Tuesday. “This isn’t, ‘Did you see someone steal my neighbor’s bike 40 years ago?’ This was pretty heinous.”

Welch was known to travel with Helen Craver, his girlfriend. She died in 2009.

Anyone with information or memories of that day is encouraged to come forward, Ladany said.

It’s unclear if police have interviewed the still-incarcerated Welch or how, exactly, they came upon the break as the anniversary of the girls’ disappearance rolls around.

Long silent since the girls went missing, the Lyon family thanked law enforcement and the community for their “tireless efforts” on the case.

“The fact that so many people still care about this case means a great deal to us,” the family wrote in a statement. “We are grateful for any information the public can provide to help bring this story to its conclusion, and ask that the family’s privacy be respected during this time.”

Board Denies Commutation for Child Molester Implicated in Sisters' Disappearance

Delaware's Board of Pardons has a denied a commutation request from a child molester who also has been named a person of interest in the 1975 disappearance of two sisters in Maryland.

Fifty-seven-year-old Lloyd Lee Welch was sentenced in 1998 to life in prison, suspended after 33 years behind bars, for unlawful intercourse, unlawful sexual penetration and unlawful sexual contact. Board members agreed to reject his commutation application without a hearing in advance of Thursday's monthly meeting.

Maryland authorities said earlier this year that Welch was a person of interest in the disappearance of sisters Sheila and Katherine Lyon from a Montgomery County shopping mall nearly 40 years ago.

WASHINGTON - It was a notorious disappearance in Montgomery County 39 years ago. Twelve-year-old Sheila Lyon and her 10-year-old sister Katherine vanished after walking from their Kensington home to nearby Wheaton Plaza. Their 1975 disappearance sparked a massive search, but the girls were never found.

Earlier this year, Montgomery County police announced they identified a former carnival worker and drifter named Lloyd Lee Welch as a person of interest in this cold case.

Montgomery County detectives along with the help of Virginia State Police and the Bedford County Sheriff's Office in Virginia have been searching a Virginia property in connection with the infamous disappearance of the sisters.

Montgomery County police say detectives determined Welch had a possible connection to Bedford County and have been in the area since last week "looking for evidence and gathering information that may indicate that Welch had a connection to the girls' disappearance."

The property is on Taylor Mountain Road in Thaxton, Va., – which is located between Lynchburg and Roanoke. It was once owned by the aunt and uncle of Welch.

One neighbor counted the number of law enforcement searching.

She said they were focusing on the area “where the old cemetery is. You can't see it from the road. It's an old cemetery in the woods.”

Cold case detectives with Montgomery County police have spent months tracking Welch's movements before he was locked up in 1997. They released new details about him this year hoping to find the key that unlocks the mystifying disappearance of two little girls.

Welch was living in Hyattsville on Baltimore Avenue when the Lyon sisters disappeared.

The Thaxton resident we spoke with where searchers are focused says her father remembers Welch and something didn't seem quite right.

“He thought maybe he wasn't right in the head,” she said.

Back on March 25, 1975, Sheila and Katherine Lyon left their Kensington home and walked to Wheaton Plaza where they were going for lunch at the Orange Bowl.

They were seen at the mall by several people, including their older brother, and were last seen walking down a nearby street.

So far, we don't know what Montgomery County detectives managed to develop that now point to Welch.

Just a few weeks ago, he tried to get out of prison by having his sentence commuted by the state's board of pardons, but it was denied. His release date isn't for another 12 years.

"The Montgomery County Police Department continues to investigate the 1975 disappearance of sisters, Katherine (age 10) and Sheila (age 12) Lyon. In February of 2014, the Department and the FBI named Lloyd Lee Welch, also known as Michael Welch, as a person of interest in this case. Through investigation, detectives determined that Welch had a possible connection to Bedford County, Virginia."

"Since last week, Montgomery County detectives have been in the area of Bedford County, working with the Bedford County Sheriff's Office and the Virginia State Police. Detectives are looking for evidence and gathering information that may indicate that Welch had a connection to the girls' disappearance."

"The Police Department will continue to follow-up on leads and new information until this case is solved."

"Due to the sensitive nature of this ongoing investigation, no further details will be released at this time.”

Search warrant served in Maryland as part of Lyon sisters case
The search warrant was served at the home of Richard Allen Welch Sr.

Richard Allen Welch’s wife, Patricia Welch, told WUSA9 that investigators were at the home Tuesday for about 20 minutes and did not take anything. However, police in Montgomery County, Maryland, say items were removed from the home.

"Items were removed from the residence as authorized by the warrant. The search was part of the ongoing investigation into the disappearance of the Lyon sisters," the Montgomery County Police Department said in a statement.

Investigators in Maryland and Bedford County have been looking at land that belonged to the Welch family on Taylor’s Mountain in the Thaxton area.

A convicted sex offender has been indicted by a Virginia grand jury for murder charges stemming from the 40-year-old cold case disappearance of two young Maryland girls, prosecutors announced Wednesday.

Lloyd Lee Welch, 58, could face the death penalty in Bedford County for the murders of Sheila, 12, and Katherine Lyon, 10, who went missing in March 1975 after walking to Wheaton Plaza for pizza in Montgomery County, Md.

Welch was named a person of interest in the long-cold case in Feb. 2014 and evidence led investigators to Bedford County, Va. Investigators would not say if evidence was recovered during the search, but authorities said Wednesday they believe the murders were carried out in the area.

No bodies have ever been found.

A grand jury, empaneled in October, handed down the indictment Friday after hearing evidence in the case for months.

The convicted perv is locked up in Delaware for raping a young girl there and is not due to be released until May 2026, records show. He has a long history of sex crimes against minor children and authorities fear there may have been other victims “all over the country.”

He used his position as a ride operator with a cross-country carnival outfit to prey on the youngsters, cops say.

On the day the blond girls went missing, Welch was at the shopping center and “was noticed paying attention to the sisters,” cops said.

A witness description, and ensuing sketch, of the creepy man with shoulder-length hair and a mustache looks much like a mugshot for Welch that was taken two years later after he burglarized a house just blocks from the shopping center.

In the intervening years, the man traveled from Maryland to Florida, to South Carolina and Iowa and cross-country to Los Angeles. Along the way, the drifter racked up criminal convictions, including the rapes.

The Maryland case transfixed the region and forced a culture change in the area as frightened parents reined in their childrens’ freedom.