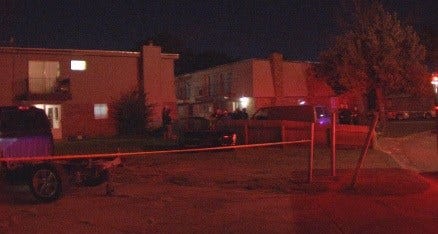 Tulsa police are investigating the deaths of four people including two children found inside an apartment early Tuesday morning.

TULSA - The bodies were discovered around midnight at the Bradford Townhomes near E. 23rd Street and S. 109th E. Avenue.

The victims are two adults, a man and a woman, and two children.  No names or ages have been made public at this time.
Tulsa police do believe all four victims were shot.

There was one survivor inside the apartment when the victims were discovered.  Police say the survivor is less than 2-years old and was not harmed.

Police have no witnesses and no suspects at this time. They're also working on a motive for the shootings.

News 9's sister station in Tulsa, KOTV-6, is at the crime scene and will be providing live updates all morning on News 9 This Morning and News9.com.


The victims include two small children, ages 3 and 5. 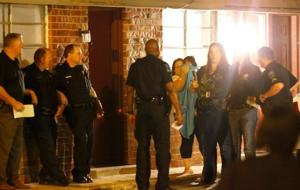 Tulsa police wait outside the scene where four people were found dead near 2100 S. 109th East Ave. The only survivor, wrapped in a blanket, is taken from the area Tuesday morning. Police estimated the survivor's age as 2 years old.
TOM GILBERT/Tulsa World 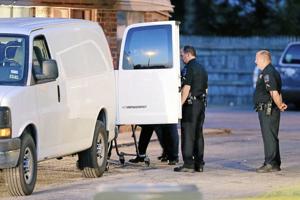 Tulsa police officers look on as the coroner places bodies into a van at an apartment where a man shot his estranged wife, their two children and then committed suicide at the Bradford Townhouses apartments in east Tulsa, OK, Aug. 26, 2014.
MICHAEL WYKE/Tulsa World 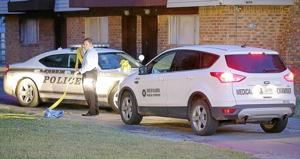 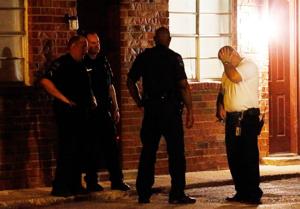 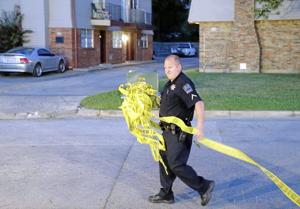 A Tulsa police officer removes crime scene tape that was surrounding a second story apartment where a man shot his estranged wife, their two children and then committed suicide at the Bradford Townhouses apartments in east Tulsa, OK, Aug. 26, 2014.
MICHAEL WYKE/Tulsa World 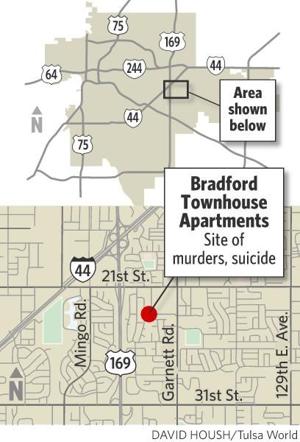 An estranged couple from Guatemala and their two small children were found dead in a murder-suicide in Tulsa early Tuesday after experiencing several months of marital problems, authorities said.

Police responded to a call at the Bradford Townhouses, 2190 S. 109th East Ave., around 12:30 a.m. Tuesday after a tenant reported finding four bodies there with gunshot wounds.

“(Family members) were visiting the apartment residence, and one of the … residents came home and found them deceased,” Tulsa Police Department spokeswoman Demita Kinard said.

Police also found a 2-year-old girl unharmed in the home, and she has since been returned to her mother, they said.

The Guatemalan Ministry of Foreign Affairs’ statement says a family friend said Fuentes Godinez regularly threatened to kill his wife and children if she refused to let him return home.

“The female victim had dropped off the children … at their father’s apartment earlier in the day,” Tulsa Police Sgt. Dave Walker said in a release. “The female victim returned in the evening hours and brought a 2-year-old child with her. This child was related to the female victim’s roommate and they were living at a separate location.”

Fuentes Godinez had two male roommates, neither of whom were home at the time the shootings occurred, Walker said.

Ramirez Fuentes and Fuentes Godinez were from San Pedro Sacatepequez, San Marcos, which is in Guatemala’s southwest corner, officials said. Their children were born in the United States, and Guatemalan authorities said a family friend reported that the couple separated two months ago.

ReeRee Elmore, a five-year resident of the apartment complex, said the family, like most others living there, kept to themselves.

“I just saw (Fuentes Godinez) when he would come outside smoking a cigarette,” she said. “He didn’t talk to anybody or bother anybody. … It’s just shocking to me because you just can’t picture somebody doing that.”

Shirley Bradley, who has lived at the complex for eight years, shared a building with the family. She said she heard a suspicious noise around 10:15 p.m. Monday coming from the area around Fuentes Godinez’s apartment but was still shocked to see multiple patrol cars in the area overnight.

“Our dog ran from the furthest point of that apartment to my door and would not come away from the corner, so I’m assuming that’s when something was going on,” Bradley said. “From what I understand, … she brought the kids over to visit and then she went to buy groceries, and when she came back … is when it all went down.”

Bradley didn’t know the family personally but said she believes that the complex has seen an increase in crime during her time there. The violent deaths have prompted her to think about moving, she said.

“My heart goes out for those babies,” she said. “They did nothing wrong. No matter the issues between the man and the woman, the children were innocent.”

The Guatemalan Consulate will continue to assist the family’s survivors and Tulsa authorities during their investigation, officials there said.

“If necessary, the Ministry of Foreign Affairs will cover the costs of repatriation of remains, if it were the family’s desire,” the office’s statement, written in Spanish, says.