The Austin Police have arrested Nicholas Williams after they say he spanked his 2-year-old daughter so hard that she died.

Nicholas Williams was arrested last week after police say he spanked his 2-year-old daughter so hard that
she died, MyFoxAustin reports.

According to the arrest affidavit, police
and paramedics responded to a 911 call made by a woman saying that the
child was not breathing at a residence in Austin, Texas, on May 23.

When police arrived, they found Williams holding his unresponsive daughter.

The officer began performing CPR on the
child until paramedics arrived. But an hour later, after being taken to
the hospital, she was pronounced dead.

Williams told police that he lightly spanked
the girl with a belt because he caught her eating poop. He said her
lips were already purple when he caught her eating the poop and believed
this was because she was crying since she knew she would be in trouble.
He said that he then put her down for a nap. When he checked on her
later, he noticed there was blood and vomit on the bed where the girl
was lying. He also said the girl was unresponsive and did not appear to be breathing.

Detectives also interviewed the woman who
made the 911 call and also lives in the home, but is not the child's
mother. Her account of the events are the same as Williams, saying that
he left the girl in the bathroom and returned a short time later to find
her eating poop. She told police that she did not see Williams beat the
victim but heard him hitting the child.

She did see that the girl's lips were purple
and she was having trouble breathing. After splashing water on her
face, Williams was able to get the girl to start breathing again. The
woman would check on the girl periodically because she was concerned.
She also told police that Williams admitted to her that he hit the girl
with the belt to punish her.

An autopsy was performed on the girl the
next day. The deputy medical examiner noticed several bruises on the
victim’s head, face, back, buttocks, chest and arms. The injuries were
greatest in the head and buttocks region according to the arrest
affidavit. The preliminary cause of death was ruled to be blunt force injuries.

Williams was charged with injury to a child, a first-degree felony.

I hope the mother is arrested also.

This poor little baby was probably beaten throughout her short life.

I hope they upgrade the charge to murder.

A "spanking" doesn't kill babies. Someone needs a refresher course in the English language.

A brutal beating can result in death.

The baby's name was Alaney Queen, according to DD.

I'd shit my britches too if this creep started beating me. But then, I would recover and kick him in the balls, providing he has balls.

This poor baby had no defense. 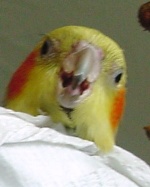 Father arrested for 'spanking baby daughter to death with a belt for soiling her diaper'
By Daily Mail Reporter
Last updated at 10:48 PM on 30th May 2011

Arrested: Nicholas Williams, 22, has been held in connection with a beating that led to the death of his two-year-old daughter, Alaney Queen

A young father has been arrested after police said he viciously spanked his two-year-old daughter to death with a belt after she soiled her diaper.

Nicholas Williams, 22, was held in Austin, Texas, last week after his girlfriend called 911 to say the child, Alaney Queen, had stopped breathing.

When police arrived they found Williams holding his daughter, who was unresponsive. After performing CPR at the scene, paramedics took the child to hospital, where she was pronounced dead.

The child had several bruises across her body, with the greatest injuries suffered to her head and buttocks.

Williams admitted to police he had spanked Alaney Queen about 10 times with a belt because he had caught her in the bathroom eating her own excrement.

He said her lips were already purple before he hit her. After then putting her down for a nap, her later found blood and vomit on the bed and said that was when he noticed she had stopped breathing.

Trails Park: The apartment block where the child was found in Austin

The woman who called authorities, who is not the child's mother, said she heard Williams beating Alaney Queen but did not see it. She said Williams admitted to her that he used a belt to punish the child.


It is thought that the girl's mother lives outside the state.

Detectives have now taken another two-month-old child who was living in the property from the couple and are holding Williams, charged with injury to a child, a first-degree felony. in jail on a $40,000 bond.

They believe the child died because of the horrific blunt force injuries she had suffered.
Investigation: Sergeant Hector Reveles said the child was severely injured

An autopsy performed on the girl's body the next day reported several bruises to the girl's head, face, back, buttocks, chest and arms.

Sergeant Hector Reveles said: 'He said he spanked her approximately 10 times with a belt.

'The child had some contusions throughout various parts of her body... It is clear the child had received more injuries than he was accounting for. Clearly he was the one disciplining the child.'
Watch the video

Last edited by Banditbird on Sun Jun 05, 2011 9:48 am; edited 1 time in total (Reason for editing : add bold to note about biological mother)

Can a mod please correct this baby's name. Thanks.

I'm glad she didn't share a name with her murderer.

My error. Queen can sometimes be used as a middle, or even first name, I presumed that this was the case.

I would have made the same mistake.