They got a search warrant. They used cadaver dogs. But they came up empty-handed.

A review of the case files in the disappearance of 9-year-old
Scott Kleeschulte had given St. Charles police investigators a
glimmer of hope about solving the 23-year-old mystery. 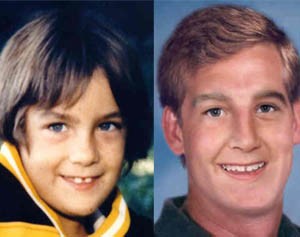 Image
from the National Center for Missing and Exploited Children.

Their actions are a snapshot of the way these cases are handled.
They get handed down from detective to detective. They aren't allowed to go cold.
St. Charles Police Lt. Mike Akers declined to say specifically
what information spurred the most recent search, which happened at
the end of November at a home in Kleeschulte's neighborhood. Akers
would say only that it had come from a comment in an old interview.

"We feel now that maybe this person wasn't very reliable or
wasn't giving us good information," he said.

Neighbors said authorities drilled holes through the concrete in
the garage and other areas around the home in the 3400 block of
Leverenz Drive. Akers said the dogs did not detect anything.

Kleeschulte has been missing since June 8, 1988. He was last
seen not far from his home walking near a wooded area known as "The
Trails" just before a fierce thunderstorm swept through the area.

As long as six weeks after his disappearance, police conducted
large-scale searches of the area near the Kleeschultes' home. The
searches involved digging — with bulldozers and shovels — at a
labyrinth of caves in the wooded hillside where Scott was known to
play with other neighborhood children. Bloodhounds, sophisticated
ultrasound equipment, helicopters and volunteers were used to scour
creeks and sewers. Tips provided by psychics were checked out.

Akers said he wouldn't comment further about the recent search
because the information is sensitive.

The search warrant was sealed for 120 days by St. Charles County
Circuit Judge Nancy Schneider. She could not be reached for comment.
Attempts to reach the property owner, who now lives in the Troy,
Mo., area, were unsuccessful.
Kleeschulte's family still lives in the same tidy ranch home as
it did in 1988, a few doors from the house that was searched. They
declined, through authorities, to be interviewed.
Akers said that even though new tips don't often come in about
the case, the investigation files are regularly reviewed.
"We're always looking at them and saying 'Did I miss anything?'
" Akers said. "Every now and then you'll get a new lead."
In Lincoln County, where investigators have two longstanding
missing child cases — Arlin Henderson, who disappeared July 25,
1991, and Bianca Piper, who was last seen on March 10, 2005 —
officials expressed a similar passion about getting the cases solved.
"We do not give up on these cases," said Lincoln County Sheriff
Mike Krigbaum. "We investigate any leads that come in. Who knows?
Arlin Henderson or Bianca Piper may show up one of these days."
Akers said he had only been on the St. Charles police force
about two years when Kleeschulte disappeared. He never was the lead
investigator, but he was among those who searched.
"I spent two days in the woods chasing bloodhounds looking for
that little boy," he said.
It was the first missing child case he worked that police didn't
solve. Akers said he keeps a photo of Kleeschulte on his desk as a
reminder not to give up.

ST. CHARLES • A Florida inmate says he knows what happened to 9-year-old Scott Kleeschulte, who disappeared from a quiet St. Charles subdivision 25 years ago, and local authorities have spent the past seven weeks trying to figure out if he’s telling the truth.

Chuck Miceli, 47, is a former police officer from the Chicago area, who authorities say has turned informant on several other cases. He was sentenced to 20 years in prison in 2010 on a federal fraud charge, and he’s spent the majority of the time since then in prison in Florida.

Miceli came to the attention of local authorities after he claimed that a former cellmate is the man who abducted Scott on June 8, 1988.

Miceli’s local attorney, Kevin Curran, declined to make his client available for an interview. But in a letter Miceli mailed to the Post-Dispatch, he gave an overview of his claims, saying that his purpose for contacting the media was to ensure “absolute transparency” in the investigation.

Miceli said he was brought to the St. Charles County Jail by U.S. Marshals on June 17. He claims to have written documentation of the details not only involving Scott’s disappearance, but 13 to 15 other abductions and killings of young children and women between 1978 and 2005 by the same man.

“At this point, Mr. Miceli has not provided any information that has led to the discovery of new evidence or new information regarding the disappearance of Scott Kleeschulte,” he said. “We’ll continue to thoroughly investigate additional information the same way we do with each and every lead.”

Scott was last seen not far from his home in the 3300 block of Leverenz Drive, walking near a wooded area known as “the Trails.” It was just before a fierce thunderstorm swept through the area.

As long as six weeks after his disappearance, police conducted large-scale searches of the area near Scott’s home. The searches involved digging at a labyrinth of caves in the wooded hillside where Scott was known to play with other neighborhood children.

Tips on the case have come in steadily over the years, the last significant one in November 2011, after St. Charles police gave the case a fresh review. They reinterviewed neighbors and came across new details.

Detectives got a search warrant for a home near Scott’s. They brought out cadaver dogs and drilled holes through the concrete in the garage and other areas around the home. But they came up empty.

The Kleeschulte family declined to comment on the latest investigation.

ST. CHARLES (AP) — After months of investigation, authorities are dismissing an inmate's claim that he knew what happened to a 9-year-old St. Charles boy who disappeared 25 years ago.

Scott Kleeschulte was 9 when he went missing on June 8, 1988, while walking near a wooded area not far from his home.

Chuck Miceli claimed a former cellmate abducted Scott. Miceli is a former Chicago-area police officer turned informant. He was sentenced to 20 years in prison in 2010 on a federal fraud charge.

Miceli was brought to St. Charles County by U.S. Marshals on June 17 and stayed while police investigated his claims.

St. Charles County prosecutor Tim Lohmar told the St. Louis Post-Dispatch that the investigation yielded nothing new. Miceli was sent back to a federal prison in Florida.

"We fully investigated his claims and at this point, we have no new information that would assist us in solving this cold case," Lohmar said.

Scott disappeared just before a fierce thunderstorm swept through the area. For six weeks after his disappearance, police conducted large-scale searches of the area near his home. That included digging at a labyrinth of caves in the wooded hillside where Scott was known to play with other children. Bloodhounds, ultrasound equipment, helicopters and volunteers checked creeks and sewers.

Police over the years after investigated several tips. In one case in November 2011, detectives obtained a search warrant for a home near Scott's. They brought out cadaver dogs and drilled holes through the concrete in the garage and other areas around the home. Nothing showed up.

Miceli claimed to have written documentation of details of Scott's disappearance and 13 to 15 other abductions and killings of children and women by the same man. He said the crimes occurred between 1978 and 2005.

Miceli mailed a letter to the Post-Dispatch offering an overview of his claims, writing that he contacted the newspaper to ensure "absolute transparency" in the investigation.