Killeen Police are investigating a report that 16-year-old, James Johnson III, is missing.
His parents told police he was last seen at a house at 3602 Palm
Tree Drive on Wednesday, November 11. His mother said that he was
sleeping when she left but when she returned more than 12 hours later
he was not home. 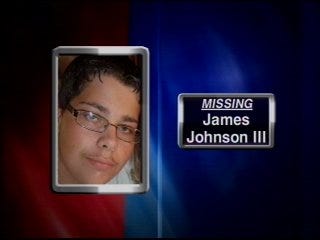 James, a son who his parents say never missed curfew
by more than two hours, has been missing since Wednesday from his home
at 3602 Palmtree Lane in Killeen. Killeen police confirmed Monday they
are investigating James' disappearance.

Victoria Johnson went to work around 7:30 a.m. Wednesday
while her son slept late because there was no school on Veterans Day.

James was gone when she returned home at 8:30 p.m.

James shocked his parents – not by getting into trouble – but by being a normal teenager. He played video games for hours.

He chatted with girls for long lengths of time that left his father, James
Johnson Jr., wondering how he could talk for that long.

He loved all kinds of music and would eat just about anything his mother cooked.

Victoria called her son's cell phone around 7:30 p.m. Wednesday to ask about
dinner, but no one answered. The home appeared unchanged when she
returned.

She called police around 10:30 p.m. Wednesday when the worry grew too big.

James had no recent fights with his parents and left his Sony PSP and MP3
player, all signs he did not run away, his father said.

His parents have called hospital emergency rooms, friends and acquaintances
since Wednesday. They checked cell phone records and knocked on doors.

Jose Rivera Jr., 17, wore a T-shirt Monday with James' picture on it. Victoria ironed the
screen print on 13 shirts given to James' friends to wear to school Monday.

Rivera said when teenagers chided him for having a
seizure, being overweight or talking with a stutter, James stood up for
him. When he became frustrated after losing at a video game, James knew
just what to say.

"He always made you laugh if you were sad," Rivera said. "James always knew how to cheer people up."

Now Rivera and James' other friends are comforting the Johnsons during their hard time.

Killeen police allowed the Johnsons to report James missing around 7:30 a.m.
Thursday after he was missing 24 hours. Police filed the report as a
"runaway," James' father said.

"We walked through ditches and fields. We were doing all that alone and with friends," Victoria added.

They wait for the return of the furious metal clanking of James frantically
pushing buttons on his PSP. The sound that once frustrated James'
father is absent and missed.

A call to the Killeen Police Department was not returned Monday.

Anyone with information is asked to contact the Killeen Police Department at (254) 501-8800.

Killleen police captured two teens and a juvenile who they believed
murdered a 16-year-old Killeen teenager missing since Nov. 11.

They
brought Johnson to a home in Killeen where the three teens beat
Johnson. According to the affidavit, Cantu then strangled Johnson to
death with a rope.

Justice of the Peace Garland Potvin arraigned
Villareal and Cantu on one charge each of murder tonight. He set bond
at $1,000,000 each.

Police found Johnson's body off
Farm-to-Market 1237, north of Temple around 2:15 a.m. today. The
affidavit stated Cantu led them to the body.

Three teenage males have been arrested in relation to the murder of a missing teenage boy from Killeen.

Seventeen-year-olds Victor Villarreal Jr. of Fort Hood
and Paul Andrew Cantu of Waco have both been charged with the murder of
16-year-old James Johnson III.

Cantu confirmed to Killeen police Thursday that he and
Villarreal picked up Johnson at his home and took him to a house in
Killeen on Nov 11.

Cantu told police that at the house, he and Villarreal physically beat Johnson. Cantu then strangled him with a rope.

After failed attempts to reach him on his cell phone,
his parents told authorities they asked his friends for help, but they
said they also had not heard from him.

According to the affidavit, Cantu agreed to take Killeen officials to the location of the body.

Killeen teen to be tried as adult on murder charge
Posted On: Monday, Mar. 29 2010 11:12 PM
A Killeen teen will be tried as an adult in the November strangulation death of a Shoemaker High School student, a Bell County court decided last week.

Jonathan Darvalics, 17, is charged with murder in the death of James Leroy Johnson III, 16. Darvalics was booked Friday into Bell County Jail on $500,000 bond.

Darvalics, who was 16 at the time of the incident, was certified to stand trial as an adult, Bell County District Attorney Henry Garza said Monday.

Cantu guided police to the body Nov. 19 after he implicated himself, Villarreal and Darvalics in the murder.

Court records state that the defendants told police that they punched Johnson in the face, head and body while at a Killeen home. During the beating, Cantu put a rope around Johnson's neck and strangled him until he died, an arrest affidavit stated.

Family members told the Herald the slaying might have stemmed from a run-in the Shoemaker freshman had with a gang at the school earlier in 2009. Gang members harassed Johnson, who was not in a gang, they said.

Central Texas Teens Sentenced In 16-Year-Old's Beating Death
Two more teenagers who pleaded guilty to murder in what police said was the gang-related slaying of another teenager have been sentenced to prison.

BELTON (June 24, 2011)--Victor Villarreal, Jr., 18, of Fort Hood, and Jonathan Darvalics, 17, who pleaded guilty to murder in April in what police said was the gang-related slaying of a Killeen teenager, have been sentenced to prison.

Darvalics was sentenced to 36 years in prison Thursday.

The charges stem from the Nov. 11, 2009 beating and strangulation death of James Johnson III, 16, who disappeared from his family's home at 3602 Palmtree Drive in Killeen on Veterans Day 2009 and whose body was found a week later in Troy.

Johnson was last seen at around 7:30 a.m. Nov. 11, which was a school holiday in Killeen, and was asleep as his mother left the house.

He was gone when his mother returned home at about 8:30 p.m.

According to an arrest warrant affidavit, Cantu, Villarreal and the unnamed juvenile picked Johnson up and took him to another home in Killeen.

There, the three teenagers "engaged in beating (Johnson) about the face, head and body with their fists," the affidavit says.

"Paul Andrew Cantu admitted to putting a rope around (Johnson's) neck and strangling him until Johnson was dead," the affidavit said.

The affidavit says that Cantu agreed to show Killeen police investigators where Johnson's body was dumped near Troy.