October 25, 2011 - A Winnipeg mother says she does not know where to go to get help for her troubled teenage daughter, who has run away for the second time this month and struggles with a drug addiction.

Her mother, Shannon Buck, had taken the teen to the low-security facility after Chopek came home on Oct. 14 from a 10-day disappearance. 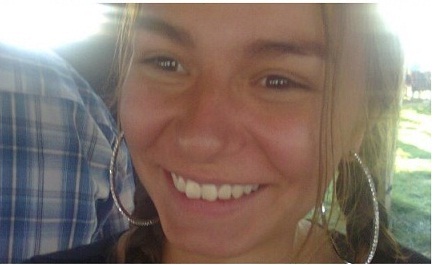 "She's not running away from home because it's a bad place to be. She's running to drugs, and there's nowhere for her to go to get help," Buck told CBC News on Tuesday.

"These drugs that she's using are not free. A roof over her head is not free. And, you know, she's really in danger of being sexually exploited."

After she ran away the first time, Chopek was found in a downtown Winnipeg hotel room.

The teen later told her mother that an older man had moved her to four different hotel rooms around the city in the span of one week, according to Buck.

"She's a 14-year-old kid, and the thing that keeps going through my mind is how did she end up in four different hotels?" the mother said.

. . . . ."The only other option is to give up your children and put them in CFS. And for a lot of women, including myself, that's not an option," Buck said.

"I don't want to give up my baby. I just want to be able to get her help."

Winnipeg police are investigating Chopek's latest disappearance. They are asking anyone with information about the teen's whereabouts to call the missing persons unit at (204) 986-6250.

October 28, 2011 - Concern over the lack of free secure addiction treatment services for youth is the focus of a downtown street protest this afternoon.

The Occupy Winnipeg site on Memorial Boulevard will be the location of the protest, which organizers said is calling on the provincial government to help families who are trying to help their drug-addicted children.

The focus of the protest is 14-year-old Lauren Chopek, who went missing after she was placed in a non-secure addiction treatment centre.

Organizers said families who want a secure addiction facility to help their children are faced with two desperate options: Paying $800 a day for treatment in a secure private facility, or turning over custody of their children to CFS, where there is no charge to the family.

Organizers said children who flee non-secured facilities are susceptible to exploitation on the streets, adding they believe the province should provide free secure addictions treatment facilities without families having to surrender care of their children to CFS.

A Winnipeg Mother calls for the Manitoba Government to change legislation
November 03, 2011 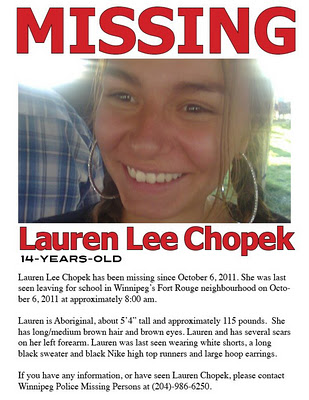 My name is Shannon Buck. I am the mother of Lauren Chopek. She is a 14 year old Metis girl who struggles with addiction issues and depression. I am seeking the right to access services for my daughter without having to voluntarily place her in the care of Child and Family Services. She has gone from receiving awards for high academic achievement, to dropping out of school, being sexually exploited, charged with criminal offences and running away 19 times, since 2008, the majority of times occurring in 2011.

Lauren is aware of the risks she is taking, but states that the addiction is too overwhelming for her to cope with and it is the addiction that has led her into a life of crime, sexual exploitation, and running away from home. Lauren wants help with her issues, but does not possess the strength at this time to behave in a manner that will keep her safe.

During the last 2.5 years, I have accessed what is available to me as a parent:

Unfortunately, these services have not been able to meet her needs. More appropriate programming is available, but only if she is in the care of CFS.

I am uncomfortable with the fact that the Government of Manitoba has structured a system that denies a parent’s right to access resources without becoming dependent upon a system that, quite honestly, is seriously flawed, when it comes to caring for our children.

I do not want to voluntarily place my child in the care of Child and Family Services for the following reasons:

• Many children who are in the care of CFS are not reported missing by their social workers (information received from a former lawyer for CFS), or social workers are not available to provide necessary consent for the Missing Person’s Unit to act in a timely manner.

(Examples: During a meeting with the detective assigned to my daughter’s missing person’s cases, I was informed that the social worker who was dealing with the other girl that had gone missing with her, had not contacted Missing Person’s to consent to a media release - this was 5 days after the girl had gone missing. After she recognized me from a news broadcast, a community member approached me with a story about her niece, who she had run into on the street. The niece told her that she had been on the street for 2 months- the girl had never been reported missing, and the woman was unaware that she was not in her assigned placement until their discussion.)

• 74% of young girls involved in the sex trade are of Aboriginal descent (which my daughter is) and of that 74%, 98% are currently in the care of CFS. (Sexual Exploitation Statistics for Manitoba)

• A Sexual Exploitation Investigator had spoken to my daughter several times without my knowledge or permission about issues that I had not yet been informed of. I only became aware of this through my daughter. I received a letter several weeks later from a treatment worker about an incident, which was not shared with me by this worker. My daughter was not in the care of Child and Family Services and my rights as a parent to be informed were violated by this worker and her agency.

• Because my daughter is a high risk, female adolescent, the chances of her being placed in a hotel room are high, due to the lack of appropriate foster placements ( Office of the Children’s Advocate Report on Emergency Placements for Children in Manitoba’s Child Welfare System, 2009)

One recommendation, made to the Manitoba government, by the office of the Children’s Advocate, in 2006, is that the Government should support families in accessing appropriate medical resources for their children without having to sign a Voluntary placement Agreement. This recommendation has never been implemented by the Government, resulting in the forced “voluntary” involvement with a system that has consistently proven to be more of a detriment to the health and wellbeing of our children and families, then a help.

I am aware of other facts, that suggest that the CFS system and government policy in regards to at risk children and services is seriously flawed, paternalistic and more about the money then the welfare of our children. Some of these facts include:

• One of the requirements of applying for a Voluntary Placement Agreement, is providing financial information, in order to obtain services from CFS.

• Many of the programs that are available are funded according to the number of children in care who are involved in the program, thereby creating a need to keep the numbers high in order to access funding

• All CFS agencies are funded by the Provincial Government, specifically, the Family Services Minister

• All CFS agencies are funded according to how many children they have in care, thereby creating a need to keep the numbers high in order to access funding

• There are three times more kids in CFS today than were ever in residential schools. If you want more information please see First Nations Child and Family Caring Society of Canada http://www.fncfcs.com/.

As a concerned parent, seeking help for my child, I have taken exactly the same actions to protect her, as CFS would and in some situations, more. The issue arises with the accessibility of more appropriate services. There are other programs available, but are out of reach to me because she is not in the care of CFS and I am unable to afford the cost myself.

All I want is to be able to access resources for my daughter to keep her safe and alive without having to be dependent on this system. I am capable of doing so, I am simply not allowed to.

I am but one of many parents who are struggling with this issue. Due to the historical relationship between the Child Welfare and Aboriginal peoples, personal experiences ,(my own and that of parents I have worked with during my time in the social services sector), and the stigma attached to having a child in the care of CFS, many parents do not see a VPA as a viable option for them. This had led to our children and youth unable to access resources and a high number of at risk youth going without the help they require. The parents I have worked with have come seeking more help for their children, but have come up against a closed door that does not permit them to enter unless they place their children in the care of Child and Family Services.

I am calling on the Government of Manitoba to change legislation in order to remove the systemic barriers that parents face when attempting to access services for their children and to ensure that all families are able to reach resources without forced dependence upon Child and Family Services regardless of race or income.

Not only would a change to the legislation, empower more parents but would also reduce the pressure on an overwhelmed Child Welfare system. If the government would not force parents to enter the system through restricting access to services, the burden would be lifted from the shoulders of social workers and they would better able to conduct the business of protecting children.

It is time that we take a stand to allow parents to be parents and stop the Child and Family Services System from feeding off of the suffering of our families and especially our children. Not only for myself and my situation, but for the other families in this province that are experiencing the same pressure to give over care of their child to this antiquated, colonial and oppressive system.