baby girl in his mouth


A
dead newborn baby girl was discovered by a dog in Oklahoma City on
Saturday and the family pet carried her body home in its mouth.

The
dog's unnamed owner was out of town so the pet, Luke, returned the
infant's body to the house-sitter at the property just off South Air
Deport Road.

The mixed breed was carrying the three to five
pound dead baby, which had been wrapped in plastic, in his mouth and
placed it by the woman's feet around 8am, KFOR reports.

Scroll down for video 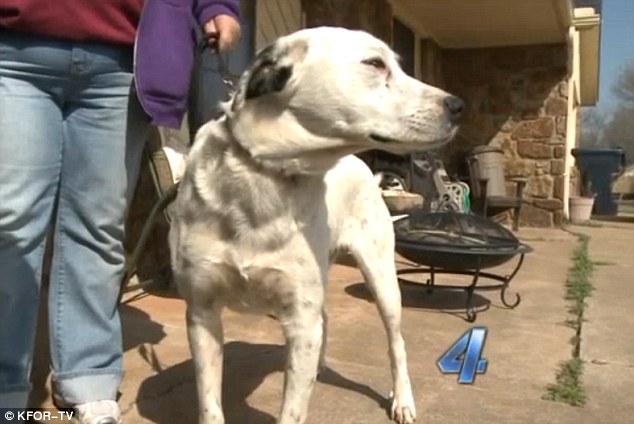 Gentle: Luke, a six-year-old mutt, is a gentle dog that would never have hurt the child, his owner insists 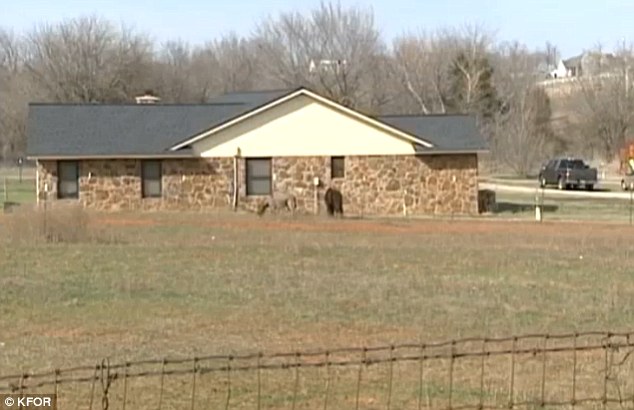 Returning home: The dog called Luke brought the plastic wrapped baby's body back to this home in Oklahoma City

Police do not believe the dog was in any way involved in the baby's death but merely stumbled across the abandoned body.

'He was carrying it just like a momma pup and laid it at my feet,' the house-sitter told the station 'I believe [Luke] found it, picked it up and brought it. There was no trauma you could tell he inflicted.'

Police
are now desperately searching for the infant's mother, who they believe
may be suffering from health problems following the birth.

They are also examining the body to try and establish whether the baby was born alive or was a still-birth.
Police
Captain Dexter Nelson told the broadcaster: 'We don’t know where the
baby came from. If it was born in the area outside or if someone brought
the baby out there to dispose of it.'

Luke tends to roam over a large area making things even more complicated for police. 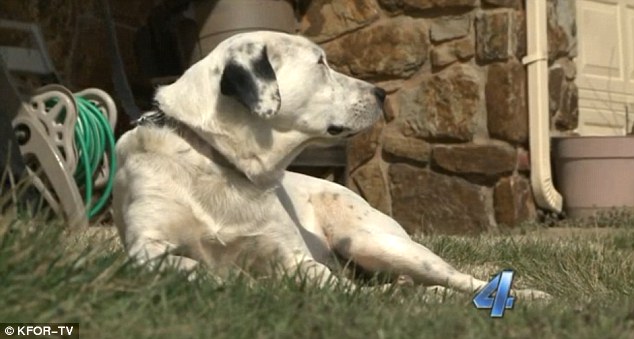 Gentle: Luke returned home carrying the baby harmlessly in its mouth 'like a mamma pup,' his caretaker said 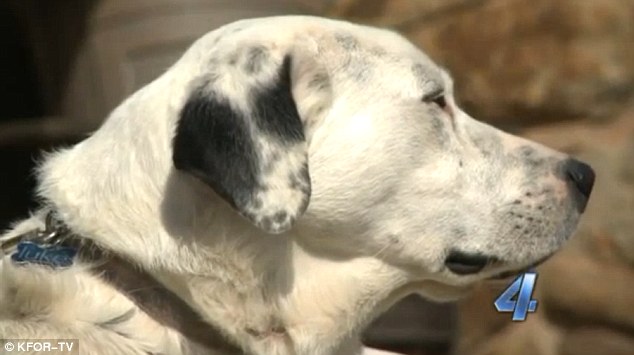 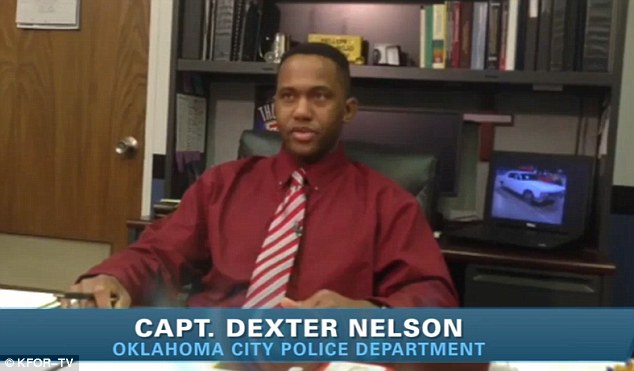 No
crime? Police Captain Dexter Nelson said medical examiners are trying
to determine whether the baby was alive when she was dumped or whether
she was stillborn

Oklahoma has a 'safe haven' policy which allows
a mother to anonymously leave a child which is less than a week old at a
designated place without fear of questioning.

No one has reported a missing baby in the area or come forward with information this week.

Police are now going door to door and are combing the area to try and find discarded evidence.

'We
are asking anyone in the public who knows someone who was pregnant not
too long ago who is not pregnant now or if they believe this child could
be that child or involved in that situation to call us,' Nelson told
the Oklahoman.

'We
don't know if the baby was stillborn or what the cause of death was in
this particular case, but that's why homicide is investigating.'

'We do not even know at this time if a crime has even occurred.'

'Due to the condition that the child was found, we believe that the mother could be at risk of health problems,' he added.

The baby was described as white and her mother would have been in her third trimester.

It's a crime to wrap a baby in plastic and toss it like garbage.

Maybe LE is trying to lure them in. One of the things LE said of The Boy in the Box was that they think they were too quick to announce homicide and anyone that knew anything immediately became too shy to come forward. :-(

It's outrageous that a mother would treat her new born that way, still born or not. Even if I had a still born birth at home I would not do that. I would wait for the EMT's and just cuddle the little one with love. Loving her will all my heart and soul while mouring her passing. That's what we get with allowing all abortions. Little angels are just body parts to get rid of. Just breaks my heart.

I shed a few tears for this little unnamed angel. Remember, for God know's you even in the womb. If it's murder then only the death penalty will serve in my opinion. You take the life of an innocent then you should forfit yours. William

tinalovesnick wrote:
My first pregnancy ended at 5 months 12 years ago. It was at the hospital and I remember the nurse thought I was crazy because I wanted to hold him once more... I don't know how anyone can discard a baby like this woman did either,

I too have had pregnancies that ended badly. Several. I frequently wonder what if...

My mom says it will only worsen with time, as I get older.

I remember not wanting to know the gender. Now, I regret that decision.

Perhaps it takes a mother to understand?

OKLAHOMA CITY – A newborn baby found dead by a metro dog more than two weeks ago is still waiting to be identified.

Police are still searching for leads but said there is little to no new information coming in.

The medical examiner is still investigating.

Right now, all police know is the baby is a girl and her umbilical cord was still attached when she was found.

Beyond that police don’t even know if the child was born alive or stillborn.

Police said the mother is likely in need of some care both physically and emotionally.

OKC Police Capt. Dexter Nelson said, “We’ve been concerned about the mother because the medical examiner tells us some of the condition in which the baby was found, umbilical cord still attached, caused them to believe the mother could have suffered some sort of trauma.”

Holly Towers, with Lillyfield Christian Adoption and Foster Care Services, said, “A woman in this situation is going to have a lot of grief, a lot of shame, maybe feel depressed, probably feel afraid to reach out.”

Towers said regardless of how this child died, it is likely the mother is experiencing a lot of emotional pain.

While no one knows why the baby was abandoned, Towers said this tragic story is a reminder there are always better options for surrendering a baby.

She said, “There are families out there who are willing to open their families and their hearts to a child no matter what.”

Meanwhile, police have searched the area with dogs, Air One and ATVs, even knocking on doors in a nearby neighborhood hoping someone knows something.

Capt. Nelson said, “We even tried to put a tracker on the dog that found the baby to retrace the dog’s steps but the dog’s been spooked and will not return to the area.”

The medical examiner’s office is still waiting on test results they have done on the baby girl which can take anywhere from six to eight weeks.

If you have any information that could help police find the mother of this child you are asked to call CrimeStoppers at 235-7300.

Nothing new yet. I hope they don't treat the little angel like body parts for testing and give her a decent furneral. If I had the money I'd pay for it and give her a good name. The moment I first read the article I thought of a name for her that sticks in my mind. They probably won't even give her a name. William

William, I don't think they will. I just want them to get to the bottom of this and put one or more in prison, where they belong.

twinkletoes wrote:William, I don't think they will. I just want them to get to the bottom of this and put one or more in prison, where they belong.

I got an email from the Coronor's office. They were waiting on tests and whether on or not they find the mother. Then they would bury her. No details on giving her a name. I want to try and work on that.

twinkletoes wrote:William, I don't think they will. I just want them to get to the bottom of this and put one or more in prison, where they belong.

I got an email from the Coronor's office. They were waiting on tests and whether on or not they find the mother. Then they would bury her. No details on giving her a name. I want to try and work on that.

I got no new updates. Then the tornado hit Moore. They've been too busy to follow up on this case. My guess is that the little one will be buried unnamed in a unmarked grave. :(