A suspect in the disappearance of a five-year-old Calgary boy and his grandparents will be charged with two counts of first-degree murder and one count of second-degree murder.

Police would not identify the suspect until he is formally charged,but CTV News has learned that Douglas Garland, 54, was arrested for the second time and there are no other suspects.

The bodies of Nathan O’Brien and his grandparents, Kathryn and Alvin Liknes, have not been found. But police said they now have enough evidence to conclude that they are dealing with a homicide investigation, not a missing persons case.
Missing Calgary Family

Calgary Police Chief Rick Hanson says first and second degree murder charges are being filed in
connection with the disappearance of Nathan O'Brien and his grandparents at a news conference
in Calgary, Monday, July 14, 2014.
(Jeff McIntosh / THE CANADIAN PRESS)

“The preponderance of evidence is such that it has led our investigators to believe that they are dead,” Calgary Police Chief Rick Hanson said Monday.

He said police are “optimistic” that they will find the bodies, “so the family can find closure on this.”

The Liknes and O’Brien families are “devastated,” Hanson said.

“I think it’s safe to say that even as the days went by, there’s always a hope. There’s always a glimmer of hope and unfortunately with the laying of charges, we’ve taken that hope away from the family.”

Police are asking the public to continue to come forward with any information about the case. Rural residents in the Airdrie area are also being asked to check their properties and notify police if they see anything suspicious.

Nathan and his grandparents were last seen two weeks ago, when the boy was visiting his grandparents for a sleepover. When his mother arrived to collect him the next morning, the three family members were gone.

Until recently, police had to assume that at least one of them was being kept alive somewhere, Hanson said.

But that changed Sunday afternoon, when investigators compiled all the evidence and met with the Crown prosecutor.

“The decision was reached that this is now a homicide investigation and charges would be appropriate against the accused individual,” Hanson said.

He said the investigation has been “painstaking.” It involved “meticulous” searches of a rural property near Airdrie, Alta., and two municipal landfills. Police also received about 900 tips.

“This file has been built piece by piece by piece,” Hanson said. “There is no single piece of evidence that would be what people would like to think is the smoking gun.”

Douglas Garland was questioned in connection with the missing family in early July after being arrested on an unrelated charge.

He was re-arrested sometime Monday morning after he was asked to leave a local hotel. Garland had been staying at the hotel as part of bail conditions stemming from an unrelated charge.

Garland was released on $750 bail last Friday, after he appeared in court on the unrelated charges.

Police have confirmed that Garland has a connection to the Liknes family. His sister is in a relationship with a Liknes family member.

Mayor, PM offer condolences
Calgary Mayor Naheed Nenshi issued a statement Monday offering his condolences to the victims’ families and thanking police for their work on the case.

“I, like all Calgarians, am terribly saddened to learn about the murder charges that were laid today related to the missing persons investigation in our community,” he said.

“My heart goes out to the Liknes and O’Brien families, and I know that they will continue to have the support they need from all of us at this very difficult time. My thanks go to my colleagues at the Calgary Police Service and the women and men of the RCMP for their hard work on this investigation.”

Prime Minister Stephen Harper also tweeted that he and his wife, Laureen, are “saddened by the tragic news from Calgary.

“Our thoughts & prayers are with the O'Brien & Liknes families during this time,” he wrote. 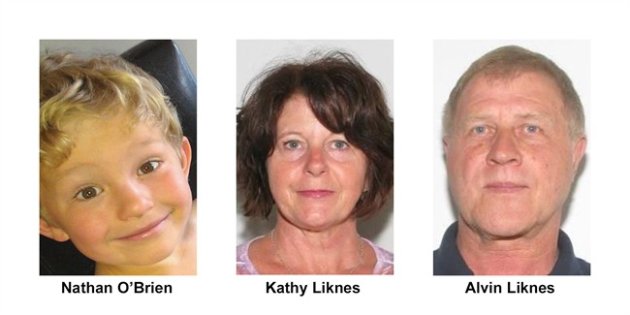 The Canadian Press - Nathan O'Brien and his grandparents Kathy and Alvin Liknes are shown in Calgary Police Service handout photos. THE CANADIAN PRESS/HO

Douglas Garland, the man suspected in the murders of three Calgary family members who vanished two weeks ago, has arrived at the Calgary Police Service arrest processing unit to face multiple murder charges.

He is expected to be formally charged later Tuesday.

Garland, who was taken into police custody on Monday, is facing two first-degree murder charges in the deaths of Kathy and Alvin Liknes, and a charge of second-degree murder in the death of their five-year-old grandson, Nathan O’Brien.

Garland declined to answer any questions from reporters as police led him handcuffed from a van into the processing unit.

Earlier on Monday, Chief Rick Hanson indicated that police believe the three family members are dead even though their bodies have not been found.

"We are putting a very complex case before the courts," said Hanson, adding police are very confident with the evidence.

"There is no single piece of evidence that is what people would like to think is the smoking gun."

The 54-year-old Garland was staying at a motel in Airdrie, just north of Calgary, after being released on bail on unrelated charges on Friday, when police arrested him Monday.

It's been previously reported that Garland has several connections to the Liknes family.

His sister is in a common-law relationship with Alvin Liknes's son, and police believe Garland and Liknes were involved in a patent dispute and that there was "bad blood" between them because of business dealings that had gone sour.

Hanson said that police are offering their condolences to the family.

"There's always a glimmer of hope and unfortunately with the laying of the charges we've taken that away from the family," said Hanson. "They're devastated."

Despite the chief's comments, a family member says they won't believe the three were murdered until their bodies are found.

In an email to The Canadian Press, Teena Prevost, the sister-in-law of Kathy Liknes, said her family is still holding out hope they're alive.

Police said after multiple searches they have ended their investigation at the Parkhill home where the three Calgary family members were last seen.

The home belongs to Kathy and Alvin Liknes.

"There are still many questions left to be answered, however, due to charges before the courts, I can't release those details and the investigation continues," said Hanson.

Police did not comment on what may have motivated the killing.

News that police believe the three family members are dead touched off an outpouring of grief and support online, with Calgarians and Canadians across the country expressing heartbreak over the grim outcome.

Over the past two weeks, the mystery of the family's disappearance has connected Canadians, all hoping for a happy conclusion to the case.

While some say they had feared this would be the outcome, all said they had been hoping and praying for the three to be brought home safely.

As well, Prime Minister Stephen Harper tweeted that his family's thoughts and prayers are with the O'Briens and Likneses during this time.

Police said last week there was evidence a violent crime had occurred in the Liknes home and that blood found inside the house indicated whoever it belonged to would likely have been in medical distress.

The search for evidence will continue this week at the Spyhill landfill in Calgary, where investigators are still sifting through mounds of garbage.

Police will also continue to search an acreage in Airdrie that belongs to Garland's parents.

Rural property owners, including oil companies or businesses, are still being asked to search their properties for anything suspicious.