A19-year-old St. Cloud mother accused of repeatedly trying to suffocate her then-3-month-old daughter in June took a plea on Tuesday that carries the possibility of decades in state prison. 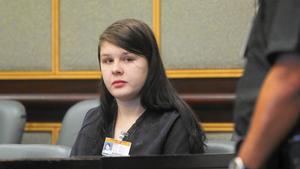 Sentencing is set for Dec. 16, and Murphy will have broad discretion: No agreement was reached between the state and defense on a sentence. Each charge carries up to 30 years behind bars.

The minimum under state guidelines would be about nine years. Winter's defense is expected to ask for a lesser sentence. Murphy made no promises to Winter, other than "a sentence tailored individually to you."

She will undergo physchological tests in the meantime, he said.

In court Tuesday, Winter spoke only to answer the judge's questions. Asked why she agreed to the plea, Winter told Murphy, "I believe it's in my best interest."

Winter was jailed after a series of episodes the girl underwent while at Nemours Children's Hospital in Orlando, where Winter took her daughter in early June, reporting that the child was vomiting blood.

Winter told detectives she had been overwhelmed. The teen, who had once hoped to become a nurse, had dropped out of high school to raise her daughter, and was unemployed.

"I was just really stressed out and I wasn't thinking, but I wasn't trying to hurt her," she told detectives in an interview.

After Tuesday's hearing, Brenna Winter's mother Allison Winter said that the baby is living with her father and doing well.

Allison Winter said she had not visited her daughter in jail, and didn't know what to believe about the allegations against her. She added: "I hope [Brenna] gets the help she needs. She needs help."