Toledo OH ---- An autopsy has revealed the cause of death for
3-year-old Shaniya Sullivan is drowning.
The coroner has not yet ruled the death as either accidental or a
homicide.

Investigators say they found Sullivan unresponsive around 8:30 p.m.
Tuesday at a home in the 2800 block of F Street in north Toledo.
Sullivan, who has cerebral palsy, was found face down in a bath tub in
what has been described as scalding water.
Paramedics rushed the child to Mercy St. Vincent Medial Center where
she died. Her father went to see her at the hospital and said she was
burned from head to toe.
No charges have been filed in connection with her death.

Autopsy results released Thursday from the Lucas County Coroner's
Office said scalding hot water contributed to the drowning death of
3-year-old Shaniya Sullivan. Additional test by the coroner are
pending.
The corner's office said Shaniya, who had Down
Syndrome, died at 9:10 p.m. Tuesday evening at a home on F Street in
Toledo's north end. Shaniya was taking a bath.
As her sister went to grab a towel, family members said the toddler
turned the hot water on after turning the faucet. The water was
so hot it literally melted the skin off the toddler, police said. Toledo
police detectives are treating the toddler's death as suspicious.
Detectives have not charged anyone and the case remains under
investigation. 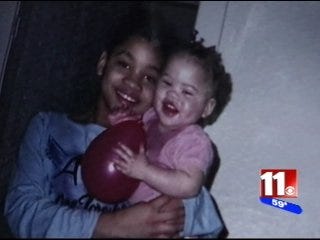 By Joe Stoll - bio | email
TOLEDO, OH (WTOL) - The father of a 3-year-old girl with cerebral
palsy who was found dead in a bath tub Tuesday night wants to know what
happened to his daughter.
"When I went in to see her, I just couldn't believe how she was burnt
so bad," Stephen Sims said. "She was burnt from head to toe."
Investigators say they found Shaniya Sullivan unresponsive around
8:30 p.m. Tuesday at a home in the 2800 block of F Street in north
Toledo. She was found face down in a bath tub in what has been described
as scalding water.
Paramedics rushed Shaniya to Mercy St. Vincent Medial Center where
she died.
The child's grandmother says it was an accident. She says Shaniya's
siblings were bathing her while their mom was at her house. "My grand
baby, she turned the hot water on when the other daughter went to get
the towel," said grandmother Cecelia Streeter. "She slipped and fell
back, and she burned."
Police are investigating. They have conducted interviews with both
parents and an autopsy will be conducted.
Her father confirms the 3-year-old was unable to walk because of the
cerebral palsy.http://www.wtol.com/Global/story.asp?S=12346829

RE: Shaniya Sullivan?‏
Hi Ovie - the following is from my assignment
manager who has been checking on this:

There is nothing new on the case. Cause of
death remains drowning but there is no ruling on the death..that is
whether
it is accidental or a homicide. The coroner’s office has not received
toxicology from the lab.
From:oviedo45
Sent: Tuesday, May 18, 2010 11:02 AM
To: Stoll, Joe
Subject: Shaniya Sullivan?

HI,
I saw your story and wondered if the final autopsy results were in - I
can't seem to find any follow up - was the death ruled an accident or
homicide or is there no ruling yet? I am an Admin at
www.justice4caylee.org and she is one of our cases. Thanks

When the baby falls in the tub of scalding water why isn't she picked up not left to drown!

The drowning of Shaniya Sullivan, 3, of North Toledo, was related to scalding, said Dr. Maneesa Pandey, a Lucas County deputy coroner. That means "she was scalded, then she drowned," Dr. Pandey said.