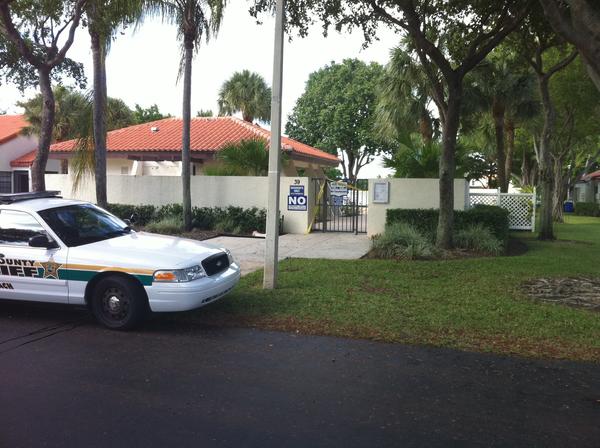 A Broward Sheriff's Office car patrols a community pool in the Independence Bay community of
Deerfield Beach, where a 2-year-old was found unresponsive in the pool on Saturday.
(Larry Barszewski, Sun Sentinel / November 17, 2012)

A 2-year-old girl who went missing from her home Saturday afternoon died after being found in a nearby community pool, according to the Broward Sheriff's Office.

Julianna Lacerda was with her mother at their Centennial Court home in Independence Bay when the girl apparently slipped out undetected, BSO spokesman Mike Jachles said.

"When the father came home from running errands, that's when they noticed the little girl wasn't around," said Jachles. The family called 911 when they couldn't find the missing girl at 2:27 p.m.

However, before deputies arrived on the scene, the child's father found her in the pool, pulled her out and tried to administer CPR, Jachles said. Broward Fire-Rescue officials began aggressive resuscitative efforts when they arrived and flew Julianna via BSO Air Rescue to Broward Health Medical Center in critical condition.

She was pronounced dead at the hospital at 3:34 p.m., presumably from drowning, Jachles said.

The homicide unit is conducting an investigation and the medical examiner's office will confirm the cause of death, he said.

"We don't believe foul play was involved," Jachles said. "This just appears to be a very sad tragedy." Jachles said it's not known how Julianna was able to get out of her house —one in a row of single-story attached units — or how she made her way into the gated community pool, which was about 100 feet away.

"Unfortunately, in Florida we're surrounded by water. All it takes is a split second for a child to slip away," Jachles said. "There's no substitute to direct supervision by an adult."